Late October is a time for whiskey and Dylan Thomas poetry, and Hunter’s Stew. Perhaps another whiskey to savor the screams of the politicos, and of course, the Golden Moutza of October.

And there’s an election on November 8 and when it’s over, we’ll find out the important thing:

Are the people of the United States of America interested in keeping Western Civilization alive and throwing the Idiocracy on the ash heap of history? Or do we want that Brave New World of the Jacobin left? 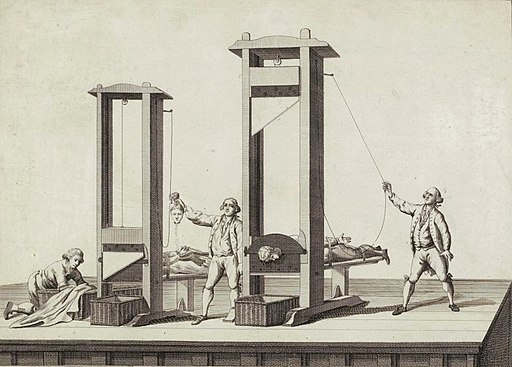 I’m somewhat genetically disposed to Western Civilization. I really don’t want to brag, but my peeps invented it, although at a crucial time it was later saved by the Irish–and since then the Hellenes and Hibernians have been brothers.

Also, my ancestors invented the Moutza, the ancient hand sign of disgust and contempt.

And who really wants their heads lopped off by another Jacobin Reign of Terror? Nobody. See what the left did when they took over Twitter? But their days of using the little blue bird to honor themselves and crush their enemies may soon be at an end.

So, let’s get right down to it, shall we?

We’re a free people still, and the screams you hear today are the screams of the hard-boiled Marxists and journalists mourning their loss of complete control over Twitter and the public square. You open your palm to these idiot malakiesmeni who’ve made their brains soft on purpose and just say NAH! Or FEESAH ETHO! (Blow on it.)

Lisa Radville the self-described Queen of Halloween hates the idea of trunk-trick-or-treat. My politics may differ from Lisa’s. You can call me Mr. Conservative, but I hate trunk or tweet too.

“Moutza goes to whoever started trunk or treat,” she says. “Nah! Halloween is for traipsing all over your neighborhood ringing doorbells ( not ring cameras but we all know our high crime requires them) Decorating a trunk and getting candy from it is dumb. My thoughts from the Queen of Halloween ”

This stupid idea involves adults wearing costumes hanging out in parking lots waiting for kids to pass by for “trick-or-treat.” Is there anything more idiotic than this?

Why not send your kids into parking lots with adults wearing masks luring children to their cars with candy? What could go wrong? Sometimes I wonder if we’re just too stupid to live.

And now comes chief among the fools, their Queen Whoopi. On the “The View,” Queen Whoopi insisted that when the left lost an important election in 2016, they didn’t riot or erupt.

“Whoopi Goldberg for pretending not to know about the year plus riots in the streets,” writes Kathy Kokonis, who by name or genetics is wise in the ways of the Moutza. Kokonis including evidence of her claim.

Which was more Moutza-worthy, Queen Whoopi thinking she could debate Sen. Ted Cruz who has argued before the Supreme Court, or Queen Whoopi playing to the mob, saying she didn’t know about Antifa or riots, while insisting that Democrats don’t riot.

C’mon Queen Whoopi, blow on this for Kathy Kokonis.

“Nah! Tom Brady!” says Jim Babinak of Prince Tom, the perfect quarterback with the perfect life and perfect wife who is now dropping him.

“Brady had a rough month and deserves a Moutza for saying NFL players are like the military on deployment. I don’t know many military families that can take ten days off in mid-deployment to jet off to the Bahamas to save their crumbling marriage,” adds Babinak. “Maybe it’s the concussions talking but Tom playing football and serving the country are not at all close to the same sacrifice. Feesah Etho!”

Soldiers thought Brady was a moron.

“We both wear a uniform, and our marriages/relationships can be strained, but the similarities end there,” a veteran and mom responded to Brady’s nonsense. “He plays a game to entertain people. We risk our lives to defend this country.”

Yes Prince Tom, blow on it.

“How about a posthumous award to Sacheen Littlefeather who allegedly appropriated American Indian heritage and was lauded for years as an activist,” writes Cathie Butler. “Now, after death, her biological sisters claim it was all a fraud. Nah!

Bingo, Cathie Butler. Sacheen Littlefeather was all the rage when she was the Indian princess speechifying at the Oscars in place of Marlon Brando. But her sisters say that she’s a fraud. An ethnic fraud.

But gender and ethnic identities are so darn confusing. Half the political leadership of America can’t answer the question “What is a woman?” And still, they wonder why they’re projected to get a big political butt whipping on Nov. 8?

Let’s let the famous Cherokee princess, Sen. Fauxa Hontas, the liberal Democrat of Massachusetts decide this one. Senator? Is Sacheen Littlefeather a fraud? Dennis Byrne, Chicago writer, retired newspaper editorialist and author of the oh-so-timely “The Governor You Do Not Know” nominated Gisele Barreto Fetterman.

“Why her? Because, according to Joe Biden, she’s “gonna be a great, great lady in the Senate.” Ya, great, just what we need. But Biden spoke the truth. Gisele, knowing full well that John shouldn’t run for any public office, is following the lead of Dr. Jill, who also knew full well that her husband, Joe, would be unable to handle the presidency.

“Yet Jill and Gisele didn’t stop their husbands from running; perhaps even encouraged them. I’m 80 and my wife said she’d rather kill me than watch me run for public office. Killing Gisele would be inappropriate, but the Golden Moutza is. Nah! “

Joe should know. His wife Jill is the secret boss just like Edith Wilson.   And Gisele Barreto Fetterman would be the secret Senator.

The left is applauding Fetterman now even though he is obviously mentally impaired. They believe in one thing: power.

Bryan Surek doesn’t want to spoil his Moutza with politics.

“I try to stick to non-political Moutza and Stacy Abrams makes it hard when she suggested in a roundabout way that abortion could address inflation issues,” writes Surek.

“However, Aaron Boone, manager of the Yankees, gets my October 2022 Moutza nomination. Boone indicated that a fly ball hit by Aaron Judge in Game 2 of the ACLS was ‘killed’ due to Minute Maid Park’s roof being open and the wind impeded the trajectory of the ball. That’s a Moutza-worthy excuse to blame the weather for not getting a home run. Wind in baseball Arron Boone? Huh? Nah Aaron Boone and enjoy watching the Series. Nah!

That’s a good one Bryan. I wonder what excuse Stacy Abrams and Hillary Clinton come up for the Red November. They had the Russians for a while, and played that for years until they were found out. But the New York Times and the Washington Post never did return their Pulitzer Prizes for stories about “Russia collusion” that turned out to be a hoax.

The Democrats, as noted, still have race. They’ll never give up the race card. Abrams, running for governor in Georgia is accusing Republicans of racist oppression of the vote in her state, even as Georgia breaks records for voter turnout. And she gets away with it.

There were so many excellent nominations. I can’t thank you all enough for making me laugh, and think.

Does Lori Lightfoot deserve one for offering a karaoke competition as crime runs wild in Chicago? Perhaps. She’ll get her Moutza soon at the hands of Paul Vallas. His family are experts in the Moutza art.

Does Gov. J.B. Pritzker deserve one for condemning critics of his dangerous no-cash-bail Safe-T Act as racists and carnival barkers? Yes.

But I’m going to let the people of Chicago and Illinois decide that, and whether they care about passing the Voter IQ Test on November 8.

Democrats are people too. I married one of their tribe. I fell in love with her at first sight. She was marching against Reagan and nuclear power when we first started dating. We’ve been married 36 years. We just went out on a date with friends at Bartlett’s FishCamp restaurant in Michigan City.

The meal was superb. And on the way home, I thought of all the young people who, these days, only date those of their own political tribe. That’s so limiting and toxic and anti-diversity. Just ask Queen Whoopi.

So, I’m going to go non-political with the October Golden Moutza:

Yeah. I know there are those of you who love Candy Corn. You should seek mental help. And, I may have given the horrid crap the Moutza before this. I don’t care. It deserves another until all the hands of the world disappear.

Too much of it may very well spell the end of Western Civilization. And without Western Civ, we’re toast.

And blow on it.